Read How We Protect Patients from COVID-19 >>

Digestive Health Associates & Center of Reno|About Us|Blog|Do You Know What’s in Your Beef? 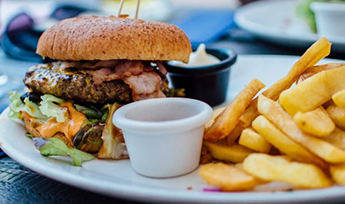 Do You Know What’s in Your Beef?

Americans consume approximately 5 billion hamburgers each year which equates to roughly 1.2 billion pounds of “meat.” Fast food is big business. Most consumers presume that the hamburger they eat is composed primarily of meat. But is it?

In 1984, this humorous advertising slogan, “Where’s the beef?” was popularized for a well-known fast food burger establishment. Their assertion at the time was that their beef patties were much larger when compared to other fast food burger establishments. The pictures of their patties were undeniably bigger but we all missed the most important question. The real question is what is in the beef patties? And exactly how much beef is there?

Fast Food Burgers: What Are We Really Eating?

Published a recent study that analyzed eight different brands of fast food hamburgers. Each hamburger was weighed and the price per gram of hamburger was calculated. A piece of each hamburger was prepared for and examined by a microscope. The meat content, water content, other tissue types including bone, fat, nerve, plant and parasites were assessed.

The question became, “what are most of these burgers made of?” The answer is water. The amount of water in these burgers was as much as 37-64 percent. But considering we are eating a burger because we expect it to be beef, then how much beef is really in the patty? Surprisingly, the meat content was as low as 2 to 15 percent in the eight types of hamburgers analyzed.

So what else is in the patties? That leaves 20-50 percent that is not water or meat. Other tissue types that were identified included: nerves, blood vessels, bone, and adipose (fat) tissues, as well as parasites which were found in two hamburgers. Plant material was also found, which is usually used as filler.

But we know what you are thinking, “I don’t eat that much fast food,” or “I make hamburgers for my family and friends at home,” which is perceived as being healthier. But is it?

In 2000, federal officials were struggling to remove potentially deadly E. coli from hamburgers when an innovative company from South Dakota came up with a novel idea: injecting beef with ammonia. Ammonia is a colorless gas with a characteristic pungent smell that is used in many commercial cleaning products. Although in wide use, ammonia is both caustic and hazardous. The company, Beef Products Inc., had been looking to expand into the hamburger business with a product made from beef that included fatty trimmings the industry once relegated to pet food and cooking oil. The trimmings were particularly susceptible to contamination, but a study commissioned by the company showed that the ammonia process would kill E. coli as well as salmonella.

Officials at the United States Department of Agriculture (USDA) endorsed the company’s ammonia treatment, and have said it destroys E. coli “to an undetectable level.” They decided it was so effective that in 2007 when the department began routine testing of meat used in hamburgers sold to the general public, they exempted Beef Products.

With the U.S.D.A.’s stamp of approval, the company’s processed beef has become a mainstay in America’s hamburgers; what is found in school lunches, business cafeterias and in the frozen meat section of your local grocery store or supermarket. The company says its processed beef, a mash-like substance frozen into blocks or chips, is used in a majority of the hamburger sold nationwide. But it has remained little known outside industry and government circles. The federal government agreed to the company’s request that the ammonia be classified as a “processing agent” and not an ingredient that would be listed on labels.

Now this is just scraping the surface of what’s really in a lot of processed meat. What should we do? Buy your meat whole. If you can, source it locally. Have the butcher behind the counter grind it for you that way you know exactly what is in your hamburger meat. Which is simply, just meat.

Please take the time to think about it. You deserve it.

Schedule an appointment with a Reno GI doctor near you

DHC
Due to the risk of COVID-19 (Coronavirus), if you are experiencing any symptoms of a flu-like or respiratory illness, please call (775) 600-4717 to reschedule your appointment. Appointments will need to be pushed pack 2-3 weeks based on your symptoms.
Read How We Protect Patients from COVID-19 >>